The celebration included a showcase of Philippine culture not only through a diverse selection of regional foods but through entertainment as well. The Nevada KALAHI Philippine Folkloric Ensemble provided a traditional Santa Cruzan parade which included kids from the Spring Valley Montessori School.  (Watch Video: Pinoy Pride Festival 2012 Santa Cruzan Parade – Kalahi with Montessori Kids .  Video by Robert Henry)  A portion of the event admission proceeds is scheduled to go to Three Square Food Bank.

Chamber members helped man a booth with Juan B Free (Hepatitus B awareness), APALA (GOTV-Get Out the Vote), and Clark County Election Dept. 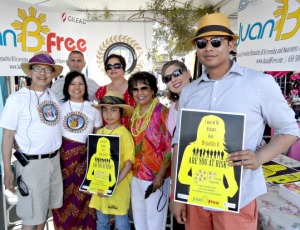 U.S. Housing and Urban Development Secretary Shaun Donovan spent some time in Las Vegas in part to send the message for struggling homeowners in Nevada that help is available.  Citing the “landmark” multibillion-dollar settlement aimed at holding banks financially accountable for their role in the housing crisis, Donovan made a point to identify services available to homeowners facing foreclosure or who find themselves underwater on their mortgages.  The settlement includes the country’s five largest loan servicers, including Bank of America, Wells Fargo and JPMorgan Chase and is scheduled to return about $1.5 billion to Nevada to help homeowners with principal reduction, loan modifications and refinancing at low-interest rates.  HUD has a hotline set up for inquiries from the public:  Hope Hotline (888-995-HOPE).

The Southern Nevada Business Resource Network (SNBRN) hosted the Rapid Resourcing for Small Business event today at the Vegas PBS facility.  The SNBRN group was formed in December 2010 with the purpose of connecting aspiring and existing business owners with community resources that could help them start and grow their businesses and create jobs in Nevada.

The Greenspun Media Group in association with Workforce Connections hosted the first in a series of workshops to ssist small businesses with their daily issues through sessionsl of educaitonal, informative and networking opportunity seminars.  Chamber members attended to learn more about the history, background and current media channels offered by Greenspun Media Group. 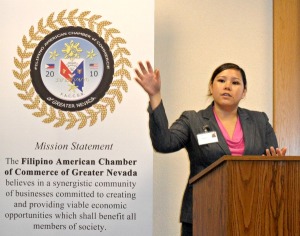 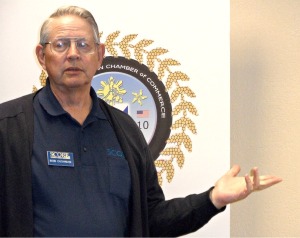 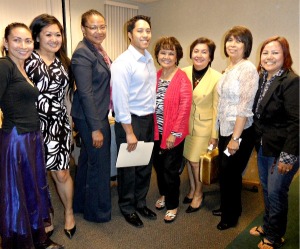 The Ilocano-American Association of Nevada held its annual picnic today.  It was an excellent turn out with lots of food, fun, music, and dancing.

AyalaLand Inc President & CEO Antonino T. Aquino attended the opening event festivities of the very first AyalaLand office in the US, today at the Seasons Mall, which is owned by AyalaLand.  Milpitas Mayor Jose “Joe” Esteves joined the celebration to congratulate Mr. Aquino and to present to him the Key to the City.  Mr. Aquino reciprocated with a gift as well during the “invitation only” luncheon and press conference which followed the ribbon cutting ceremony.

The luncheon was MC’d by Seasons Mall Community Relations Consultant, Mr. Ben Menor who invited the press in attendance to a lively discussion with the luncheon panel who consisted of Mr. Aquino, Mayor Esteves, Former Hercules Mayor Andy Paras and his spouse Daisy, along with Real Estate Dir. of AyalaFil (US) Co, Inc and Asset Manager of the Seasons Mall, Dinna G. Bayangos.  Although most members of the audience were from the local Bay Area, guests from as far away as Las Vegas were in attendance.  Given the success of the Seasons Mall, the initial questions and comments centered around the natural interest from audience members wanting an AyalaLand shopping mall in their own communities.  The discussion continued, focusing on Mr. Aquino’s assertion that the US, with its significant Filipino demographic is an important market for AyalaLand developments in the Philippines.  This was coupled with the discussion from US

attendees who agreed with the importance of continuing to develop the natural connections Filipino residents in the US have to the Philippines.  It was generally agreed that the growth of business and investment opportunities (such as AyalaLand’s) would benefit both the Philippine residents in a growing economy, as well as residents of the currently recessionary US economy.  AyalaLand’s strength in the residential market is based on a diversified offering of investments located throughout the Philippines, positioned at virtually every residential price point.  This is a compelling reason for anyone at any income level in the US, to consider placing a portion of remittance moneys into AyalaLand residential property purchases.  Such a move could be both an immediate housing benefit for relatives living in the Philippines, as well as a solid long term capital accumulation play for future retirement by US investors.

Their commitment to a diversified business model is a tribute to AyalaLand’s continuing intention to be a significant player in the creation of a rich, positive vision for the future of the Philippines.  Such a vision includes world class developments in other sectors beyond housing, including the hospitality, office, and retail sectors, creating a complete lifestyle approach.   The continued record breaking growth chronicled in their most recent annual report demonstrates the high standards and expectations governing AyalaLand’s direction into the future. 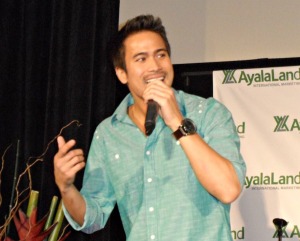 The opening celebration continued with a complete residential product presentation covering the range and depth of offerings currently available, and on AyalaLand’s drawing boards for future development.  Five separate residential brands were identified.  AyalaLand Business Development Head, Ed Del Valle presented a rendition of the “Wealth Management Seminar” approach which is currently being used by AyalaLand to educate and motivate the global OFW market to consider an investment in the Philippines.  The event was capped with entertainment from popular comedienne Fe de los Reyes and heart-throb crooner Sam Milby.